We bought a sectional when I was pregnant with Blake. A couple months ago it started making noises. We had the warranty people come and look at it; turns out it’s toast and we get a new one!  We decided to make a day of going to the furniture store to find a brand new style.

When we got the store, I took Kenley one way and Jeff took Blake the other. Kenley was fascinated by everything, as usual. She wanted to run into the couches and lay on the beds. She ran ahead of me for a second, around a corner. I caught up with her and the first thing I saw was a set of the girliest, most adorable bunk beds. I mean, dreamy princess bunk beds! The sight of them seriously stopped me in tracks. Kenley saw them and said, “Wook, Mama, a pretty bed!” 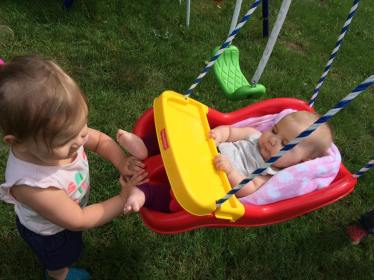 And, just like that, it took a lot for me to hold myself together. I just stood there, staring, at those bunk beds.

I can’t count the number of times I told Jeff I wanted the girls to share a room. Growing up, he and his brother (they have the same age gap as our girls) had to share a room. He was insistent the girls wouldn’t have to. I kept telling him how much fun it would be for them to have bunk beds.

In that moment, at the stupid furniture store, for no particular reason, I realized we don’t get to have bunk beds.

It’s messed up, the things that really hit you out of nowhere. There’s really no way to predict them.

I didn’t say anything to Jeff when he came over. I avoided that section of the store for the rest of time we were there. I really just wanted to pick a couch and leave.

We found a couch. While I was doing paperwork, Jeff took Kenley to the restroom. I was talking to Blake in the stroller when one of the saleswomen peaked over the counter and said, “My goodness! She sure is a healthy baby!”

No one has ever said that to us before. I heard it countless times when Kenley was an infant (because she was way chubby too), but not once has anyone referred to Blake as ‘healthy’. I looked up at the saleswoman and forced a little smile. I was SO happy. That saleswoman said something I never thought I’d get to hear. It was also sad, though; I knew she was wrong.

When we got home, all the feelings started coming back up. Kind of like when you know you’re about to barf, everything hit me at once. I told Jeff what the saleswomen said and then I started crying. He looked at me with a sad face and said, “She was talking about how chubby she is. She doesn’t know, babe. She doesn’t know what saying that means to us.” I kept crying hard and all I could get out was, “I just want the bunk beds.” He knew exactly what I meant.

As we move forward the difficult times seem to hit Jeff and me so much harder. It isn’t about the bunk beds. It is about what they represent: a future, all together. Two sisters going up and down the ladder, staying up late, talking to each other, just being sisters. As much as we try to avoid them, reminders of what lay ahead smack us in the face. Sometimes, we get smacked really, really hard.

In the midst of the hard times, luckily, our joyful times are felt much more deeply, too. We’ve done so many fun and memorable things these last few weeks. We’ve been on a little vacation, went to a carnival and a big BBQ. We’ve spent so many hours outside and at the park. Those happy times, as a family, get us through. I want so many more.